Kangaroos can hop much farther and faster than can be explained by the force of the contraction of their leg muscles.

Under closer scrutiny, scientists discovered that a spring -like action is behind the unique ability: the so-called catapult mechanism (Kram & Dawson 1998). Here the tendons and the fascia of the legs are tensioned like elastic bands. The release of this stored energy is what makes the amazing hops possible. Hardy surprising, scientist thereafter found the same mechanism is also used by gazelles. These animals are also capable of performing impressive leaping as well as running, though their musculature is not especially powerful. On the contrary, gazelles are generally considered to be rather delicate, making the springy ease of their incredible jumps all the more interesting.

Through high resolution ultrasound examination, it is now possible to discover similar orchestration of loading between muscle and fascia in human movement. Surprisingly it has been found that the fasciae of human have a similar kinetic storage capacity to that of kangaroos and gazelles (Sawicki et al. 2009). This is not only made use of when we jump or run but also with simple walking, as a significant part of the energy of the movement comes from the same springiness described above.

This new discovery has led to an active revision of long accepted principles in the field of movement science.

In the past it was assumed that in a muscular joint movement, the skeletal muscles involved shorten and this energy passes through passive tendons which results in the movement of the joint. This classical form of energy transfer is still true for steady movements such as cycling. Here the muscle fibres actively change in length, while the tendons and aponeuroses barely grow longer (Figure 2). The fascial elements remain quite passive. This is in contrast to oscillatory movements with an elastic spring quality in which the length of the muscle fibres changes slightly. Here, it is the muscle fibres contract in an almost isometric fashion (they stiffen temporarily without any significant change of their length) while the fascial elements function in an elastic way with a movement similar to that of a yoyo. Here, it is the lengthening and shortening of the fascial elements that ̳produces‘ the actual movement (Fukunaga et al. 2002, Kawakami et al. 2002). 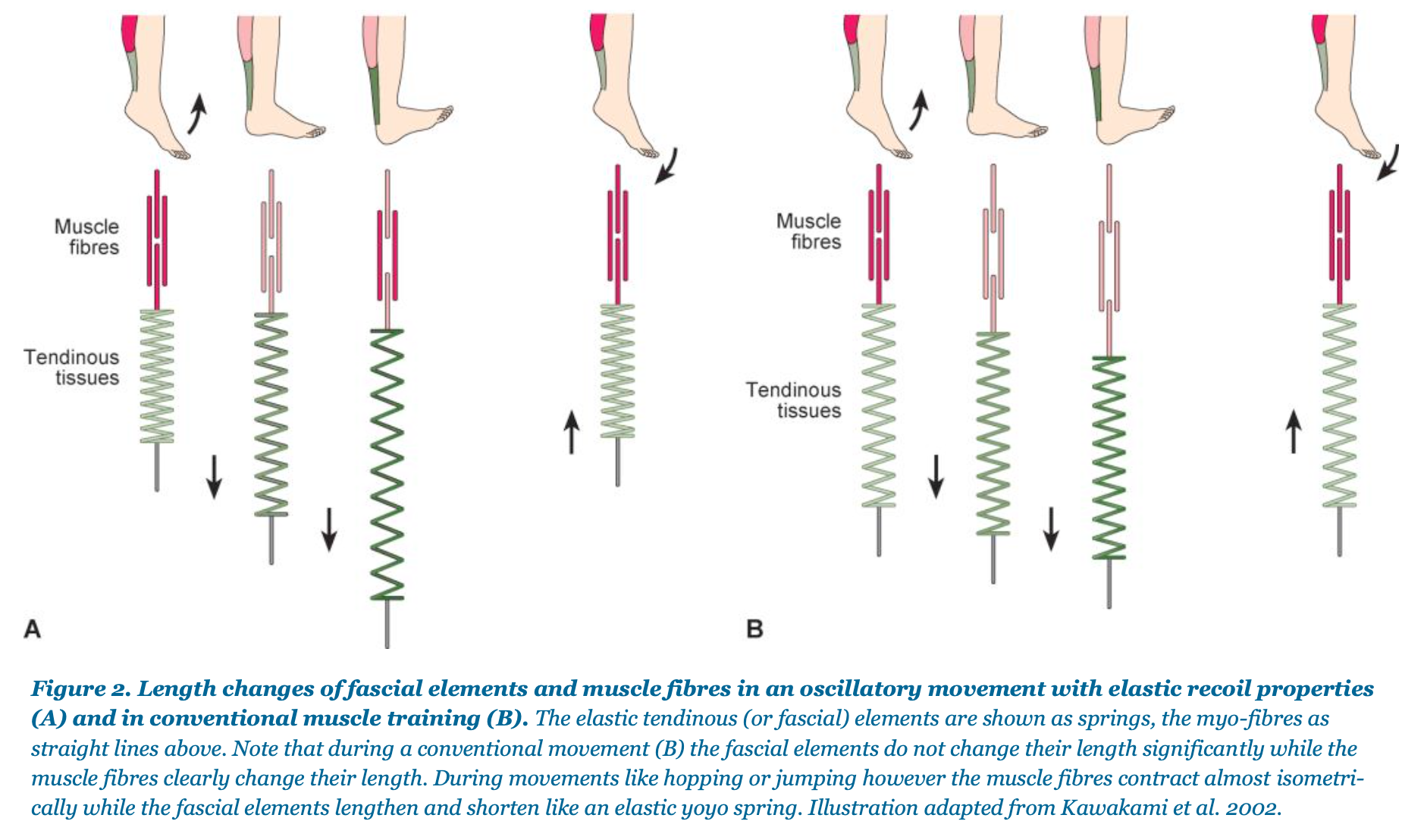 Work by Staubesand et al. (1997) suggested that the elastic movement quality in young people is associated with a typical bi-directional lattice arrangement of their fasciae, similar to a woman‘s stocking. In contrast, as we age and usually loose the springiness in our gait, the fascial architecture takes on a more haphazard and multidirectional arrangement. Animal experiments have also shown that lack of movement quickly fosters the development of additional cross links in fascial tissues. The fibres lose their elasticity and do not glide against one another as they once did; instead they become stuck together and form tissue adhesions, and in the worst cases they actually become matted together (Figure 3) (Jarvinen et al. 2002). 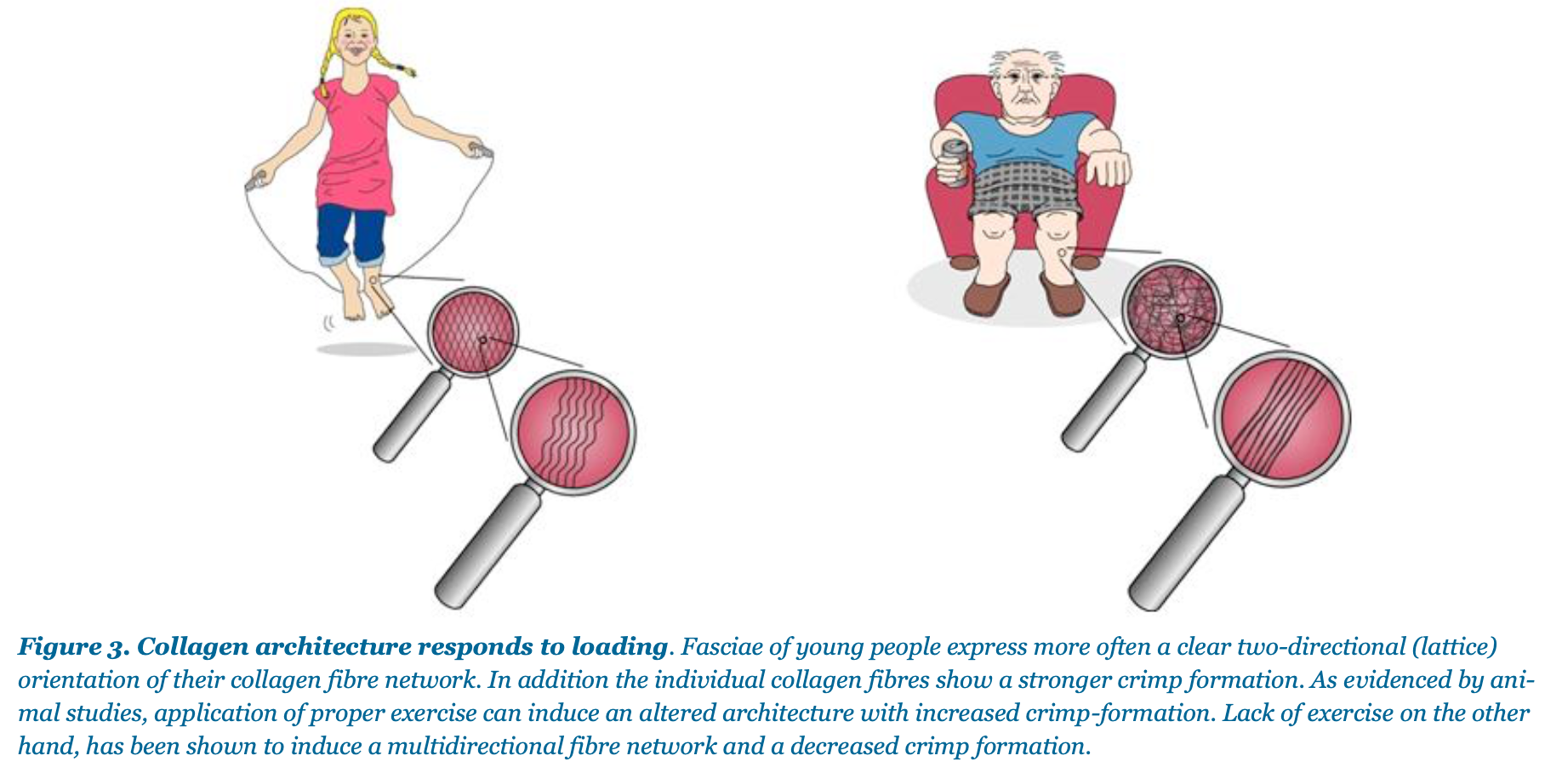 The goal of the proposed fascial fitness training is to stimulate fascial fibroblasts to lay down a more youthful and kangaroo-like fibre architecture. This is done through movements that load the fascial tissues over multiple extension ranges while utilizing their elastic springiness. 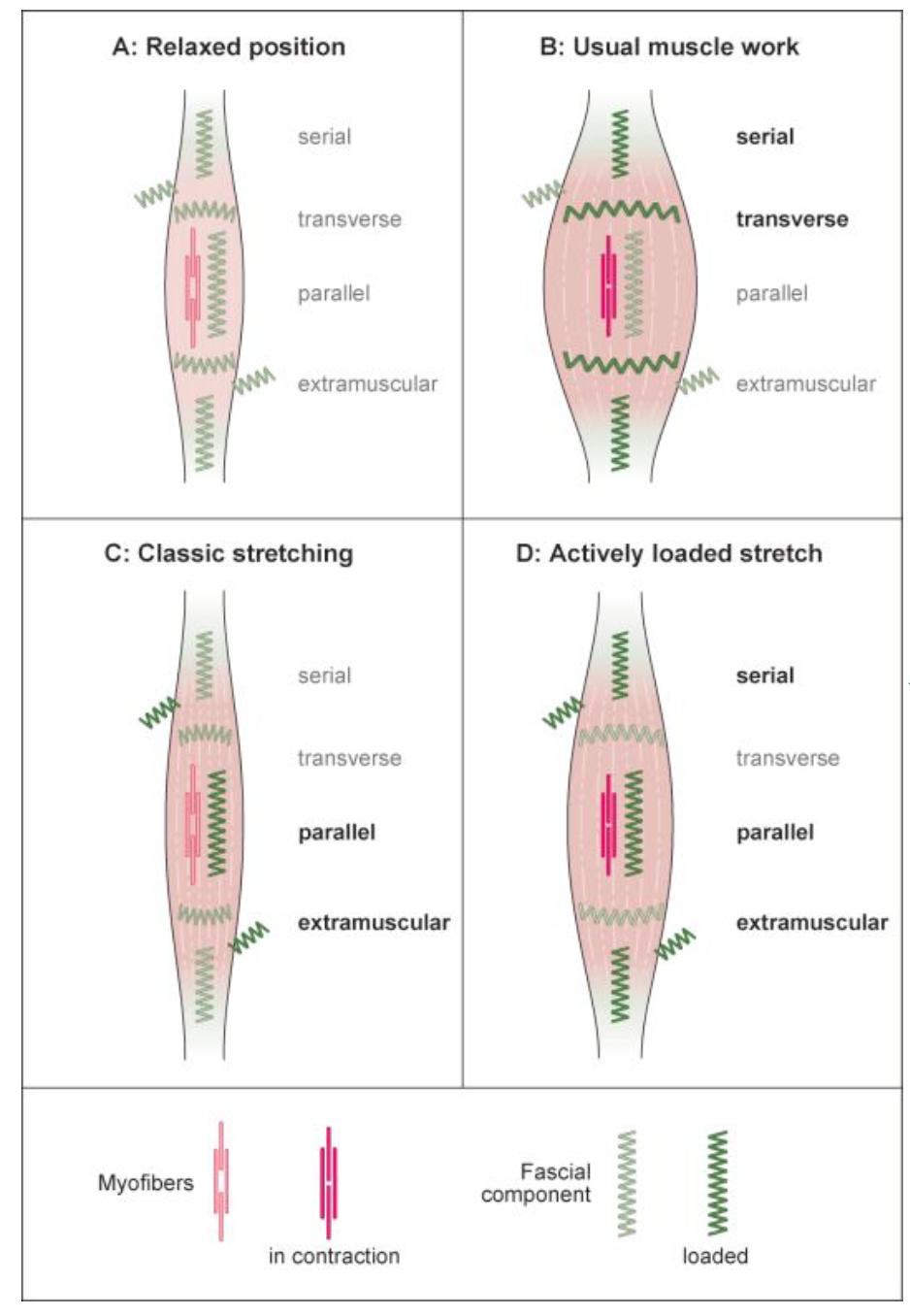 Figure 4. Loading of different fascial components.
A) Relaxed position: The myo-fibres are relaxed and the muscle is at normal length. None of the fascial elements is being stretched.
B) Usual muscle work: myo-fibres contracted and muscle at normal length range. Fascial tissues which are either arranged in series with the myo-fibres or transverse to them are loaded.
C) Classical stretching: myo-fibres relaxed and muscle elongated. Fascial tissues oriented parallel to the myo-fibres are loaded as well as extra-muscular connections. However, fascial tissues oriented in series with the myo-fibres are not sufficiently loaded, since most of the elongation in that serially arranged force chain is taken up by the relaxed myo-fibers.
D) Actively loaded stretch: muscle active and loaded at long end range. Most of the fascial components are being stretched and stimulated in that loading pattern. Note that various mixtures and combi- nations between the four different fascial components exist. This simplified abstraction serves as a basic orientation only.

Figure 4 illustrates different fascial elements affected by various loading regimes. Classical weight training loads the muscle in its normal range of motion, thereby strengthening the fascial tissues which are arranged in series with the active muscle fibres. In addition the transverse fibres across the muscular envelope are stimulated as well. However, little effect can be expected on extra-muscular fasciae as well as on those intramuscular fascial fibres that are arranged in parallel to the active muscle fibres (Huijing 1999).

Classical Hatha yoga stretches on the other side will show little effect on those fascial tissues which are arranged in series with the muscle fibres, since the relaxed myo-fibres are much softer than their serially arranged tendinous extensions and will therefore ̳swallow‘ most of the elongation (Jami 1992). However, such stretching provides good stimulation for fascial tissues which are hardly reached with classical muscle training, such as the extra-muscular fasciae and the intramuscular fasciae oriented in parallel to the myo-fibres. Finally, a dynamic muscular loading pattern in which the muscle is both activated and extended promises a more comprehensive stimulation of fascial tissues. This can be achieved by muscular activation (e.g. against resistance) in a lengthened position while requiring small or medium amounts of muscle force only. Soft elastic bounces in the end ranges of available motion can also be utilized for that purpose. The following guidelines are developed to make such training more efficient.

What is Fascia?
Next Post: Biological Laws of the Human Body