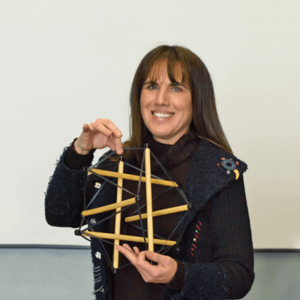 Athina Vitori has been in the field of health and exercise for over twenty years. Since 2001 she maintains Studio Soma, a space that specializes in training, evaluation and balancing of the human body.

For the last fourteen years Athina has been teaching and organizing seminars with speakers from Greece and abroad.

Athina graduated from the American College in 1996 and received a BS in Business Administration.

In 1997 she graduated from the GR.AFTS school (Greek aerobic and fitness training School. In 1999 she left for Canada where she remained for a year and was certified by Stott Pilates (full certification). In 2000 she took over the Stott Pilates representative office in Athens and certified over a hundred gymnasts in Athens, Cyprus and Turkey.

In 2006 she began her studies in Body Psychopedagogy where she completed a university degree from the University of Pesoa in Portugal.

In 2012 she started studying physiotherapy for two years at the same time she left for France where she attended the school of Fascia Therapy Danis Bois Method (Point a Pui France) which she completed in 2014 and was certified as a Fascia Therapist by the school.

In 2014 she was trained by Robert Schliep and Divo Muller in the Fascial Fitness method and together with his partner Dora Perdikari they started organizing Fascial Fitness seminars for the first time in Greece.

Athina considers evolution and knowledge to be a continuous process and is currently studying at the Osteopathie Schule Deutschand in Germany.